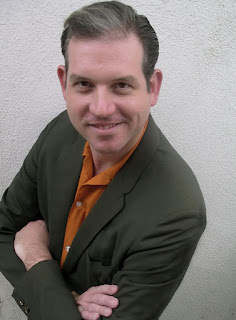 Equally fascinated with horror movies, comedians, and true crime since early childhood, Josh Hickman spent equal time wading in the heady waters of Famous Monsters of Filmland magazine, the Three Stooges comedy shorts, and Helter Skelter while growing up in various parts of Texas. When he became a writer, Hickman incorporated his comedic sensibility and lifelong love of the horror and true crime genres into his satiric writings. His past comic novels also include the fictional comedy bio THROUGH TICK & TINN: THE TRUE STORY OF THE GREATEST UNKNOWN COMEDY TEAM EVER KNOWN and the illustrated surreal, cautionary high-seas treasure-hunt saga AMBERGRIS. Hickman lives and works in Hollywood.
His latest book is the satirical fantasy, The Kinfolk: Cult of Sex and Cheese.
Visit his website at http://www.joshhickmanbooks.com. 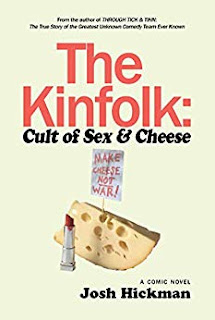 SLICES OF FEAR, that has received much critical praise from book reviewers.

Hollywood writer Mr. Hickman releases his new book as the fourth in a fantasy book series he has created and published.  In THE KINFOLK: CULT OF SEX AND CHEESE he chronicles the rise and fall of a “seductive, fanatical cult” led by the enigmatic Dillman “Papa Dilly” Bradford.
With THE KINFOLK: CULT OF SEX AND CHEESE once again fact meets fiction in the funny fantasy worlds author Josh Hickman creates. This time his fascination with cults has produced a fresh, yet familiar cast of charlatans, rubes, losers, and lucky fools, finding laughs in the cult impulse, religious fervor, and the common pathos of the average person who will do anything to find solace and belonging. Once more, author Hickman focuses his gaze on tragic comedy that is human existence--with all its fears, pitfalls, trials, and triumphs--and again he speaks hilarious truth to power in his latest entry THE KINFOLK: CULT OF SEX AND CHEESE.
“For as long as I’ve read books I’ve always been a huge fan of comedic novels,” Hickman asserted. “It was time I decided to start expressing my own comedic side of creative writing.”

Though I was enamored of writers as diverse as Edgar Allan Poe and Hunter S. Thompson, I never really envisioned myself writing as they did. With the comic novels I now write, there are many often subconscious inspirations and influences such as the Monty Python gang, Rod Serling, Chris Elliott and other writers from Late Night With David Letterman, Norm Macdonald, Peter Cook & Dudley Moore, Michael O’Donoghue and some of the other early writers for Saturday Night Live.

I wrote my first collection of short stories at twelve.

Sometimes, but not usually. I usually just make mental notes of such things, but I may scribble a note or record a note into my phone.

Do your homework, do your research, and write what you know. If you catch yourself writing about something you don’t know about, stop. If you’re not funny, don’t write a comedy.

Sometimes. I can be distracted by stupid things like news stories or moods. There are days where it just doesn’t really work, and you have to go for a walk and brainstorm or do something else. If you just force it and keep typing, you may well be wasting your time.

I usually start writing right after I get up in the morning, around 7 am. I’m usually at my peak around 10 am to noon, then by about 4 pm I’m starting to burn out and slow down. Then I read over what I have written and make corrections. I rarely write at night, but I will research and edit.

I’m working on the biography of an eccentric late-19th century, early 20th-century occultist named Beardsley Bancroft Luney, who was dubbed The World’s Naughtiest Man. So far, it’s going well, pretty dense, should be a hoot. The title will be I Am Luney.

Josh Hickman is giving away a $25 Amazon Gift Card!


a Rafflecopter giveaway
Confessions of an Eccentric Bookaholic posted at 12:00 AM