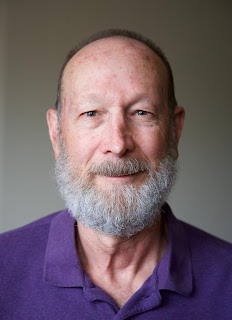 Verlin Darrow is currently a psychotherapist who lives with his psychotherapist wife in the woods near the Monterey Bay in northern California. They diagnose each other as necessary. Verlin is a former professional volleyball player (in Italy), unsuccessful country-western singer/songwriter,

import store owner, and assistant guru in a small, benign spiritual organization. Before bowing to the need for higher education, a much younger Verlin ran a punch press in a sheetmetal factory, drove a taxi, worked as a night janitor, shoveled asphalt on a road crew, and installed wood flooring. He missed being blown up by Mt. St. Helens by ten minutes, survived the 1985 Mexico City earthquake (8 on the Richter scale), and (so far) has successfully weathered his own internal disasters.

Mayra Calvani: Please tell us about Blood and Wisdom, and what compelled you to write it.

Verlin: I wanted to combine some unusual elements in a PI mystery—psychology (I’m a psychotherapist), Eastern spirituality (I mentor students), humor, a quirky, fast-moving plot, and of course the element of surprise.  After all I’ve been through in my life, getting to share what I’ve learned through the vehicle of a genre novel felt like a great idea. And the characters took off early and told me what they ought to say and do. That’s how I knew I was on the right track. 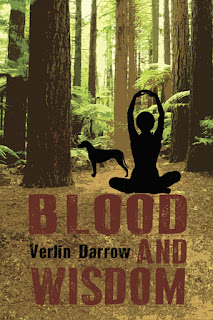 M.C.: What is your book about?

Verlin: When Private Investigator Karl Gatlin takes on Aria Piper’s case, it was no more than a threat—phone calls warning Aria to either “stop doing Satan’s work” or meet an untimely demise.  But a few hours later, a headless John Doe bobs up in the wishing well at Aria’s New Age spiritual center near Santa Cruz.  Aria had ideas about who could be harassing her, but the appearance of a dismembered body makes for a real game changer.  And what Karl Gatlin initially thought was a fairly innocuous case turns out to be anything but.

Dispatching former rugby superstar and Maori friend John Ratu to protect Aria, Karl and his hacker assistant Matt are free to investigate a ruthless pastor, a money launderer on the run, some sketchy members of Aria’s flock, and warring drug gangs.  With his dog Larry as a wingman, Karl uncovers a broad swath of corruption, identity theft, blackmail, and more murders. But nothing is as it seems, and as the investigation heats up, Karl is framed, chased, and forced to dive into the freezing water of the Monterey Bay to escape a sniper.

Against the backdrop of a ticking clock, Karl races to find answers. But more murders only mean more questions—and Karl is  forced to make an impossible choice when it turns out Aria’s secret may be the most harrowing of all…

M.C.:  What themes do you explore in Blood and Wisdom?

Verlin: How people change. What underlies ordinary reality? Why do people commit violent crimes? How does love develop out of trauma?

Verlin: It gives my life more meaning. I don’t want to be insignificant. And I have things to say.

M.C.:  When do you feel the most creative?

Verlin: When plot falls out of me. Sometimes my subconscious does the writing.

M.C.:  How picky are you with language?

Verlin: When it comes to dialogue, very picky. Other than that, in a first draft, I try to keep things rolling and worry about the exact language later.

M.C.:  When you write, do you sometimes feel as though you were being manipulated from afar?

Verlin: From within, but that feels damned afar sometimes.

Verlin: When I get bogged down in a series of projects that don’t have legs. Once I went 0 for 4—none of the manuscripts made it past sixty pages.

Verlin: I write myself into corners in terms of the plot, and then I write myself out. I love the moment when the solution to one of these puzzles floats up.

M.C.:  Is there anything that would stop you from writing?

Verlin: I’ve endured stretches when I’ve given it up, seemingly forever, but no, I think I’ll always write. It’s a blessing and a curse like everything else.

M.C.: What’s the happiest moment you’ve lived as an author?

Verlin: Seeing my first book for the first time in a bookstore. I ran up to the counter to tell the clerk it was mine, undeterred by his complete lack of interest.

M.C.:  Is writing an obsession to you?

M.C.:  Are the stories you create connected with you in some way?

Verlin: Absolutely. My novels are much more autobiographical than a reader might imagine. I exaggerate the magnitude and intensity of events (no murders for me so far), but I’ve been through my own versions of many plot points, and I know what they feel like. Also, my personal philosophy permeates Blood and Wisdom through the first person narration of my protagonist.

M.C.:  Ray Bradbury once said, “You must stay drunk on writing so reality cannot destroy you.” Thoughts?

Verlin: I disagree, although there was an era in my life in which I would’ve signed on. My relationship to reality can be summed up by this aphorism: I try to “yield gracefully to what is”, and writing is a subset of this. Making reality an adversary creates all sorts of problems.

M.C.:  Do you have a website or blog where readers can find out more about you and your work?

Verlin: Yes. www.verlindarrow.com. Thanks for the opportunity to share all this.

Confessions of an Eccentric Bookaholic posted at 7:09 AM