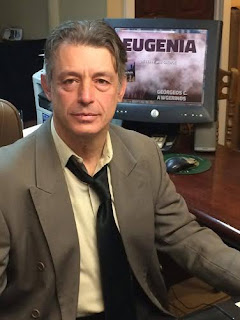 Geórgeos Constantin Awgerinøs, author of EUGENIA: DESTINY AND CHOICE was born and raised in Athens Greece. He lives in New York City.

Debut novelist Georgeos Constantin Awgerinøs paints an epic love story and political thriller in EUGENIA: DESTINY AND CHOICE. The title character, Eugenia “Jenny” Corais, a Columbia University graduate, is an idealistic young feminist and intellectual who charts her destiny against such volatile backdrops as cabaret-era Berlin, America during the Civil Rights and anti-Vietnam War protests, and the violent final days of colonial Africa. 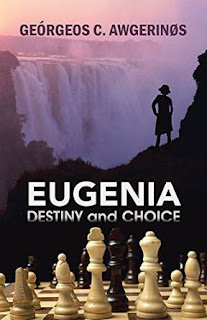 With its potent combination of politics and romance, EUGENIA: DESTINY AND CHOICE resembles  Erich Segal’s LOVE STORY, coupled with a tale of political intrigue that would fit comfortably in the novels of Graham Greene, John Le Carre or Stieg Larsson, and historical developments reminiscent of James A. Michener.

Awgerinøs’s title character, Eugenia, is complicated. Her idealism and social consciousness, the author notes, is tempered with “a compulsive curiosity for the weird, unusual, or forbidden. She aims at the light but she cannot resist the temptation of the darkness.”
Jenny’s co-protagonists include Dietrich Neuendorf, a charismatic and unyielding German human rights attorney haunted by his family’s past and his country’s history. He and Jenny quickly fall in love.

A third character, Desmond Henderson, attracts Jenny’s darker side. Despite his humble origins and abundant charm, Henderson has a deeply dark core. A former British colonial officer, he is the head of South Africa’s military industrial apparatus, linked to the high echelons of international corporate elite and secret intelligence. He is an immense figure who designs mass murder and forced relocations on spreadsheets and is involved in some of the most defining political acts of the 20th century.

But in this novel, even the most invincible have an Achilles heel. As Awgerinos puts it, “EUGENIA doesn’t romanticize power; rather, the book demystifies the powerful by exposing the intimate, vulnerable and disowned aspects of human psyche.”

Jenny, Dietrich, and Desmond cross paths and embark on a perilous journey together in an exotic African country, a wonder of nature that faces massive winds of historical tide and a catastrophic revolution.

“Through my characters and their interaction, I try to convey another view on love and sexual conflict, society, human nature and beyond-natural, democracy and collective mind control,” says Awgerinøs. “I also try to offer a historical account about a very volatile era in a turbulent region, Southern Africa.”

Awgerinøs hints that he is working on a sequel to EUGENIA: DESTINY AND CHOICE. Meanwhile, EUGENIA shows great potential to be adapted as an exciting and thought-provoking feature motion picture or TV movie.


At what age did you know you wanted to be a writer?

I was an early writer. I began considering a career as a professional writer when I was in high school.

I used to take notes very often. Lately I have noticed that if something strikes me, or triggers an idea, I am not afraid it will evaporate so, I can write a few words about it later during the day. I don’t need to be a hunter of ideas as I was in the past. When I read I use a yellow highlighter, and I usually have a notebook next to my bed, because at least 20 percent of my stories arrived while I was sleeping.

I don’t believe that someone can write a novel without being passionate and fully involved. One of the issues that depresses me, despite my pronouncements to the contrary (“Don’t dwell in the past; the past is past; it is what it is; things happen for a reason”)—which I don’t believe any longer—is that under the smooth surface I harbor deep self-loathing, guilt and bitterness for not following my talent and passion when I was in my teens, and for missing the early opportunities to pursue a writing career.

Being a writer in your late teens provides enthusiasm and vision, and potentially opens up career options that support a writing dream. Such an early breakthrough could mean becoming a journalist, foreign correspondent, screenwriter, or other writing-related career that can help someone advance in the publishing-world, toward potential stardom. When you are young you have a lot of time ahead of you. Being successful at a later age is not the same. I strive to get away from this haunting thinking which is negative and self-defeating, assuring myself that I acquired valuable life experience along the way; but I haven’t convinced myself yet, despite my effort to focus on the future.

I am cautious with tips, offering or receiving them. What works for me in a specific time and project may not work again. This particular tool may not work with another person. Each of us is unique. If an aspiring author has been born with natural talent for writing, they rarely need tips and are cautious in receiving advice. It is like asking a rich person to offer their insight on how to get rich. I know there is a tip industry for everything: investing, getting rich, attracting partners, becoming a trillionaire while sleeping, being happy, and so on. There is a tip-industry for how to become a writer too. But if writing is inside you it will lead you to the right circumstances. My writing is a bit chaotic; writing for me is like being in a parallel universe, or to use a more common analogy, being “under the influence.”

I don’t have particular hours but usually my best hours are after midnight. I have noticed that jazz or opera in the background intensifies my creativity. The outcome of a single productive night, quality and quantity-wise, amounts to more than a week’s daytime-work.

The way I write is very chaotic and inconsistent. Sometimes I can spend a week writing continuously with brief interruptions; other times I can spend a month without having any new insight about my project. I have noticed that often I start writing a particular chapter in a certain way, but in the process I can change the plot in a way I never imagined before. The storytelling can take a completely new turn that never occurred to me when I started writing the initial story. It is like trekking from Toronto to Miami and ending up in Porto Alegre, Brazil, instead.

I love reading, especially when I eat.

I believe that “I was born that way.” I started writing when I discovered the pen and blank paper. I am used to expressing myself through writing ever since I remember, whether in the form of an essay, novel or journal. In the digital age I twice started a blog but didn’t continue in that venue. I kept diaries since my mid-teens, but a couple of months ago, during a house-cleanup, I threw them all away.

I have fourteen drafts of future stories to be published. From time to time I work on the second story. In the meantime I spend a lot of time polishing the sequel to EUEGNIA.