The Can't-idates: Interview with Craig Tomashoff 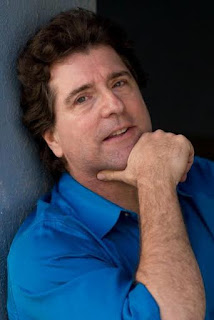 Craig Tomashoff is a freelance writer/producer based in Los Angeles. His blogs appear regularly at Huffington Post.com. Most recently, he was a producer for The Queen Latifah Show. Prior to that, he served as Executive Editor of TV Guide, and has also worked as Associate Bureau Chief for People. In addition, he has written for the Hollywood Reporter, the Los Angeles Times, the New York Times and Emmy Magazine. Prior to The Can’t-idates, he was the author of You Live, You Learn: The Alanis Morissette Story and co-wrote I’m Screaming As Fast As I Can: My Life In B-Movies with Linnea Quigley. He has also worked as a television writer/producer for such series as VH1’s Behind the Music, The Martin Short Show and The Late Show With Craig Kilborn.
His latest book is The Can’t-idates: Running For President When Nobody Knows Your Name.
For More Information
About the Book:

I’m not a political person by nature. Most of the time, it seems the political world plays out more like a lame ‘70s sitcom with all its predictable characters and routine storylines. However, last spring, I got tired of hearing friends and family complain about the lack of exciting, innovative candidates for president. Everyone seemed ready to vote for "None Of the Above." So, I decided to take a 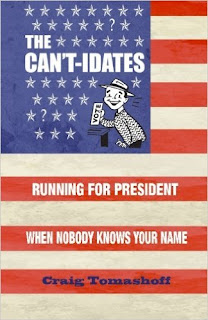 10,000-mile road trip across America in May 2015 to meet several of the more than 1600 "real people" who are legit candidates for the presidency. Including a couple in New England.

The Can’t-idates is about dreamers -- not all of whom are tin-foil hat crazy -- who just want to fill a hole in their lives by running for president. And as I drove to meet them all, I realized a lot about not just my life but also about the country. If we could all take time to believe in what our parents always told us -- "Someday you can grow up to be president" -- maybe we wouldn't be in the shape we're in.

Writing was just something I did from the time I was old enough to know the alphabet. By the time I was in the fourth grade, I was writing books on the family typewriter, then illustrating them myself. (My first characters were a group of animal superheroes who called themselves The Foogaloon Foursome.) Think Banana Splits Meets Justice League.) I’d take the pages to school, where my teacher would let me use the mimeograph machine to make copies. She even let me inhale that intoxicating freshly copied smell. Then, I’d sell them for a nickel. After that, I wrote up a weekly sports newspaper, also sold for a nickel. To nobody but my family. Still, I loved that rush of creating something that didn’t exist previously, something that I was in charge of. And over the years, there was something about seeing people read my creations gave me a sense of purpose. Which has only grown since those early days.

I’ve worked as a journalist most of my life. The early part of my career was spent covering everything from police to politics for papers like the Seattle Times and the Spokane Spokesman Review. After getting a master’s degree in magazine journalism from Northwestern University, I moved to Boston to write features and movies reviews for the Herald, the Phoenix and a suburban newspaper chain. It turns out journalism wasn’t exactly a thriving industry, so after being laid off, I moved to Los Angeles in order to broaden my work search. I ended up working for 10 years as associate bureau chief at People Magazine. Since then, I’ve served as executive editor of TV Guide, freelanced regularly for the New York and Los Angeles Times and blog regularly for Huffington Post. Luckily, I’ve been able to make enough money from freelancing to survive and get a kid into college. So far, so good.

1)      Never look back. We writers are notorious for starting a project, then doubting it and going back to re-read and revise before we’ve even done a first draft. It took me a while to realize that’s crazy talk. Constant doubt and rewriting mean you get stuck in mental quicksand. You get paralyzed and can never actually finish what you started because of the continual frustration. Writing my book is what finally taught me to never go back to reread a single page until you’ve finished a first draft.
2)      Always ask why. It’s annoying when your kids constantly ask you “Why?” It’s actually invigorating when you do it as a writer. With every idea we have, with every graph we write, we should be asking why we’re creating what we’re creating. Why is this interesting? Why is this important? Why am I doing this instead of working in, say, the banking industry? We need to keep the sense of curiosity alive at every turn, because that keeps a writer’s mind expanding.
3)      Just do it. At some point, nearly everybody says they have a story they want to write. Maybe it’s autobiographical. Maybe it’s fiction. Either way, we all have an idea we want to kick out of our head and share with the world. Somewhere along the way, though, most people lose interest when it comes time to actually write those ideas. Work. Kids. Golf. Naps. There are a lot of things that suck up our time and keep us from writing. Recognize them, then ignore them. And once you start writing and feeling the excitement, you’re set.

The toughest part about writing is that it’s a very solitary experience. It’s just you and a keyboard and an idea. Hence, it’s incredibly easy to let your mind drift. Quite often, I will search for something online, then follow links and click-bait until suddenly, an hour has gone by. Then there’s going to get snacks. And playing fetch with my dog. That’s why I gave my writing some structure. Write for a certain number of hours every day, no exceptions. Take breaks. And work hard to not judge your own work.

I try to write something every single day. It might just be a nice email note to a friend. Or a quick but quippy Facebook post. Or, God willing, a freelance story that results in money. It’s a great habit to get into and even if nobody ever sees what you’re writing, it doesn’t matter. …all that counts is you’re taking a thought in your brain and bringing it into the real world with your words. You will learn very quickly if writing is the crazy thing you want to do with your life.

I’m continuing to freelance, primarily doing entertainment-related pieces for outlets like The Hollywood Reporter. Then there’s my round-the-clock efforts to promote my book. It turns out the researching and writing a book is way easier than getting people to read it. It’s not even close. I would love to jump in to start writing a new book soon if I can free up enough money to support me while I work on it. The book concept? Still being discussed in my brain, but whatever it is, it will be very personal. Because there’s really no point in writing anything unless you find an element that makes it important for you.
Confessions of an Eccentric Bookaholic posted at 12:00 AM