In the Spotlight: Paradox Forged in Blood by Mary Frances Fisher 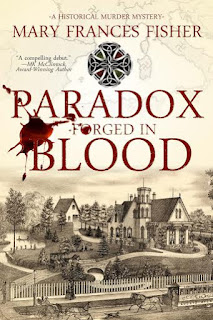 A historical murder mystery, Paradox Forged in Blood is set in Cleveland, Ohio, during the late 1930s. Four decades after the murder of socialite Louis Sheridan, the cold case is resurrected with receipt of new evidence that transports detectives back to Nazi Germany. The only living witness, Ellen O’Malley, must confront a haunting secret and her complicit actions.

Cleveland, Ohio.—Forty-seven years ago on December 23, 1939, socialites Louis and Marianne Sheridan attended a party leaving three people at home: Alice Webber, the housekeeper; Bridget, the Sheridan’s seven-month-old daughter; and Ellen O’Malley, the nanny.
A neighbor [on Millionaire’s Row] heard a loud scream about 9 p.m. and called the police. Cleveland detectives Frank Szabo and Kevin Collins found the Sheridans’ front door open and two bodies lying in a heap just inside the foyer. Although Marianne was alive, her husband had sustained a fatal gunshot wound.   …
Two days ago, Cleveland police received a package wrapped in the 1939 newspaper account of the murder. The anonymous submission contained a small handgun covered with a dried substance (believed to be blood), a black mask, and a sheet of paper with the cryptic hand-written message Forgive Me . . .
Confessions of an Eccentric Bookaholic posted at 12:00 AM