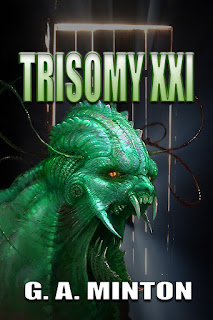 Sixteen-year-old Joshua Allen was born with an extra chromosome—a genetic aberration known as Trisomy XXI, or Down Syndrome.  When a serious accident leaves him in a coma at the hospital, Joshua receives a mysterious injection that endows him with supernatural powers.  The transformed teen is linked to a string of bizarre, unexplained deaths that have both the town’s sheriff and the coroner baffled. But when a ghastly creature from another planet lands on Earth and begins its hunt for Joshua—viciously slaughtering anyone in its path in order to complete its deadly mission—Joshua and his friends are thrust into terrifying circumstances.  What follows is a horrific life-and-death struggle with this seemingly-indestructible extraterrestrial being. The salvation of an entire race of aliens hangs in the balance…