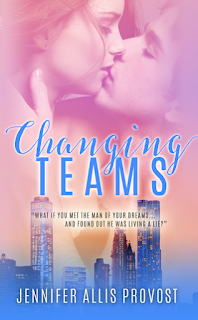 Taking lame jobs just to make ends meet is leading Britt nowhere, and she knows something has to change. She needs some excitement, and when she meets blue-eyed Midwesterner Sam MacKellar at a photo shoot, she realizes he’s perfect for her in every way—well, except for the fact that he’s gay.

Sam came to New York City to escape an existence that had become unbearable, and when his job as a photographer’s assistant leads him to Britt, he realizes he’s finally met someone who sees him as he really is. But plagued by nightmares and trapped by his own deception, he doesn’t know how she can truly be part of his life.

Friendship leads to a passionate encounter and hidden dangers…

Britt comforts Sam though his nightmares, and they begin to explore their mutual attraction, but the tables are turned when Britt faces unwelcome attention from a manipulative art instructor and Sam must come to her defense.

Sam is terrified to reveal the source of his nightmares, sure the truth would shatter his complicated relationship with Britt, but when she suffers an unspeakable trauma of her own, only Sam can help her pick up the pieces.

When Britt learns the magnitude of Sam’s lies, will his reasons and the depth of their feelings be enough to allow her to forgive him? Does she have a future with Sam, or does his deception also include the reality of changing teams?

The photo shoot hadn’t exactly gone as planned, and it was only partially the fault of my breasts. Since Giovanni was taller and therefore looking down at me, he was treated to the full view of my cleavage. As it turned out Giovanni was a breast man, and decided to enhance his already extensive view of my assets by dipping me backward until my breasts popped all the way out of my gown. Ever the gentleman, Giovanni then sought to conceal my wardrobe malfunction by hauling me upright and pressing my breasts against his oily chest.
A world of yuck.
Chivalry notwithstanding, that move left my skin and the bodice of my gown covered with greasy stains. What the hell had he spread across his chest, rendered bear fat? Since the only available period gown was now ruined, the photographer, Nash, ended up positioning me so that my back was to the camera, my face in profile as Giovanni speared me with his sultry gaze; Giovanni’s description, not mine. Of course, Giovanni’s oily chest remained in full view.
Despite the mishaps we had, the final images were breathtaking. For all my griping, Giovanni really could turn on the smolder, and the uber-tight gown showcased my waist and back. All in all, Giovanni and I could pull off a cover.
“You’ve got a great look,” Nash said as he signed some paperwork so I could collect my fee. “I’d like to use you in a few other projects—if you’re free, that is.”
For the three hundred dollar fee he offered, boy was I ever. “Sam mentioned you had a harem-themed series going?”
Nash smiled. “Did he, now? Yes, I do have that series in the works. Do you have a comp card?”
“I do,” I replied, grabbing one from my bag. It featured a rather sexy shot of me on the front, with the reverse listing my measurements, eye color, shoe size, and other fascinating things about me.
“I’ll call.”
With that, Nash gave me a courtly nod and went off to deal with whatever photographers deal with after a shoot wraps up. As for me, I handed in my paperwork to the accountant, then I headed home to my studio apartment, intent on washing off Giovanni’s oily residue. I hoped it wouldn’t make my chest break out. That, I did not need.

Britt and I spent the next few hours talking, drinking, and downing all the crazy seafood concoctions we could handle. My dining companion proved to be the adventurous sort, sampling everything from squid cooked in its own ink to a plate of yellowfin crudo. However, she drew a hard line at the octopus salad.
“Those tentacles are just so…tentacle-y,” she said, poking at the item in question. “You’re really going to eat that?”
“I’m really going to eat it.” Then I made good on my words and downed the sucker. Truth be told octopus wasn’t my favorite, but the look of sheer horror on Britt’s face made eating it more than worthwhile.
“Ugh,” she shuddered, clutching her stomach. “What if one of those tentacles grabs hold of your insides?”
“Well then, I reckon I’ll have me a permanent pet,” I replied. Britt shuddered again and sipped her wine. I withdrew my phone from my back pocket, frowning when I saw the time.
“Getting pretty late for a Wednesday evening, darlin’,” I said as I set my credit card down on the bar. “I’d best be getting you home. We don’t want you showing up for a shoot with puffy eyes.”
“Oh, I’m not modeling tomorrow,” she said. “But you probably have work.”
“That I do.”
The bartender took my card and the check, and Britt frowned. “Did you just pay for the whole thing?”
“Seems that way,” I replied. Since Britt had arrived with the intention of eating dollar oysters and sipping four dollar glasses of Merlot, I couldn’t expect her to foot the bill for the culinary adventure I’d taken her on. “Take care of the tip, if you like.”
She scowled at me, then she fished in her purse and dropped a twenty on the bar. “You really didn’t have to do that.”
“Where I come from, a gentleman pays the bill.”
She laughed shortly. “Yeah, well, it’s not like we’re on a date.”
Okay, that comment stung. I knew Britt wasn’t trying to be hurtful, and she was right, this was not a date. However, when she said it out loud it made me realize how much I wanted to be on a date with her. I wanted it a lot.
God, why did I want this woman so much? Had I taken a blow to the head?
The bartender brought me my receipt, and I scrawled my name on the dotted line. I also added an extra twenty to the tip. Yeah, maybe we’d gotten a bit too extravagant with all that seafood. The bill thus settled, I stood and Britt followed suit.
“Which way to your place?” I asked once we were outside the restaurant.
“Seeing me home?” she asked, batting her eyelashes at me. “You really are a gentleman, aren’t you?”
“My momma raised me right,” I said. “If she, or my gran, had the slightest notion I hadn’t walked a lady home they’d tan my hide but good.”
“Even now?”
“Especially now, since I’m old enough to know better.”
Britt looped her arm with mine, and we headed down the sidewalk. “Well, I’d hate for you to get in trouble on my account. Come on, it’s this way.”
A block and a half later found us standing in front of an apartment building. “This is it,” Britt said, then she stood on her toes and kissed my cheek.
“What was that for?” I asked.
“For bringing me my jacket, for buying dinner,” she replied. “And for hanging out with me. I know you must be busy.”
“I’m not that busy,” I said, “but you’re very welcome.”
Britt smiled, then she petted my cheek. “And let your beard grow in, will you? This stubble’s all scratchy.”
“Yeah, we wouldn’t want you getting beard burn on your lips.”
“That would be awful.”
We stood there grinning at each other, only stopping when a passing pedestrian sneered that we should get a room. “Well, upstairs with you,” I said, jerking my chin toward the door. “Get some rest, young lady.”
“Yes, sir,” Britt said. “Night, Sam.”
I watched Britt enter her building, and was still watching a few minutes later when a light flickered on up on the third floor. A moment later Britt appeared in the window, waving at me. I waved back, then I turned and headed toward my own apartment. Normally I would have taken a cab, but I needed to clear my head. I’d just spent the best few hours in longer than I cared to remember, and I’d spent them with a woman on a not-date. A woman that I was seriously considering calling again.
What the hell had I just gotten myself into?