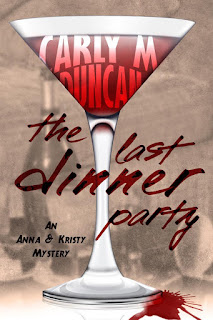 When Jeanie D'Alisa is found murdered in her bedroom after hosting a dinner party in her home, detectives Anna Cole and Kristy Hicks are called to investigate the crime. Known within her community for her generous, yet unpredictable nature, Jeanie's secrets unfold as family, friends and neighbors become suspects. Anna and Kristy discover stamped passport pages revealing travels unknown and a curious relationship between Jeanie and the charming salesman who frequents the apartment building. Meryl, Jeanie's devoted and needy friend, further complicates the investigation when she phones Jeanie's sister who is studying abroad and lies to her about the cause of death. Through a muddied pool of misdirection and betrayal, will Anna and Kristy be able to assemble the clues in order to bring Jeanie's killer to justice? The path to solving the mystery becomes tangled with faces of loved ones who are revealed to be foes in this story about the lengths people will go to in order to save themselves.

Book Excerpt:
She opened her eyes only once she heard the apartment’s front door close. She couldn’t even bring herself to turn over in the bed despite her discomfort, for she didn’t want a single mattress coil’s shift to alert him to the fact that she was awake. She waited a moment, lying in her bed, pausing in case he had forgotten anything, but the sound of footsteps faded into the distance.
Meryl Brunetti had been awake for twenty minutes, but she wasn’t prepared to begin the day. Not until he was gone. She didn’t want to see him, she didn’t want to talk, and she certainly wasn’t prepared to deal with anything they’d discussed the night before. She needed more time, and she needed to figure out how she felt.
Instead of waking up at seven o’clock to make him breakfast as usual, to start his day on a pleasant note, and see him out the door, she slept. Or, rather, she pretended to sleep. She’d been unable to sleep the night before. Her mind twirled with anger, despair, and uncertainty.
When she heard the sound of the shower signally the beginning of his day this morning, she felt drowsiness weigh on her eyelids, as though his impending exit might cause her relief. She felt her mind quiet, and forced herself to keep her eyes shut. She wouldn’t rise and she wouldn’t make a sound. She couldn’t bear to see his face. Not after last night. She’d have to pretend later that she’d accidentally slept in.
Maybe she could blame oversleeping on the alcohol. She’d need some excuse, given the average schedule she kept, which rivaled military rising hours. She might be able to blame a hangover for her tardiness depending how closely anyone was counting her cocktails last night. As a rule, she vowed always to have a drink in hand at any social gathering both as an accessory (she could never figure out a comfortable, natural place for her hands), and an ordinary pause in conversation (she often took a sip when she couldn’t think of the next thing she wanted to say.) As a result, she appeared to always have a glass in hand, but she rarely drank with the same fury as some of her louder, and more entertaining friends.
After he left their home, when she heard the click of the lock in place behind him, she emerged from the bed and walked with purpose to the coffee maker. She brewed the first pot of coffee for the day. There would be at least one and perhaps two that followed, depending on her afternoon.
The morning light that flooded into the apartment seemed excessive this particular morning. On any other morning, Meryl would relish in the beautiful daylight that overtook her home, but today she had the beginning of a headache, perhaps from lack of sleep, and she pulled the living room curtains closed.
She wanted to spend a rare day in her pajamas without responsibility, but she couldn’t afford such a day. She never could. Every day, there were endless duties to address. There was the grocery shopping, preparing for her next book club meeting, picking up or dropping off the dry cleaning, meeting with other mothers on various committees, baking for fundraisers, and sometimes making multiple trips to the high school to drop off a meal or some piece of sports equipment that her son had forgotten.
Meryl loved to be busy. The constant buzz of her life made her feel like more than the housewife she was, but she sometimes secretly dreamed of a day off from cooking dinner, and wished she didn’t have to have the answers to every question her family members posed. They trusted her to know all, and she usually did, but the exhausting task of running more lives than her own was far too much for her to think about today. She wished she could sleep away her thoughts and responsibilities.