Book review: 'In Time for You,' by Chris Karlsen 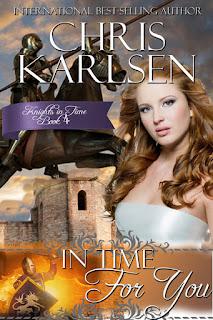 While horseback riding in the English countryside, sisters Electra and Emily Crippen find themselves trapped in a tear in time. Thrown back to 1357 England and caught by a local noble, they are in a place that is home but as frightening and unfamiliar as an alien world would be. With no idea how the tear in time came about, the one thing they do know is: they must stay together and stay near to where the event took place in hopes of discovering the way back to their modern life. That certain need to stay together is the first certainty taken from them when one sister is forced to remain in England and one is sent miles away to Wales by royal order.

There is one other hope for help the sisters don’t know exists. It’s Electra’s lover, Roger Marchand. A time traveler himself, he never told her of his past. When he realizes what has happened to the sisters, he enlists the help of a scientist friend to help him open the suspected passageway through time. Any effort to save Electra and Emily will likely cost him his life. This was the time Roger came from, a time when his country, France, was at war with England. If he is discovered on English soil while searching for the sisters, he will either be killed or taken prisoner of war. Any risk is worth saving the life of the woman he loves.

This was a very entertaining read! Having read the earlier instalments in the series, I was familiar with the overall series plot and some of the characters. The book can be read as standalone, but I highly recommend you read the earlier ones for optimum enjoyment.

While the relationship between Roger and Electra is important in this story, I think Emily and Simon's love story takes center stage. Simon is one the court's knights and has been scarred terribly both physically and psychologically, thus the way their love evolves is both touching and compelling. I especially liked and sympathized with Emily. While I also like Electra, Emily seems the more kind-hearted, wilful and impulsive of the two.

There are two elements that made me love the book. One, the differences in speech and language expressions between time periods clash at times, resulting in many humorous scenes and comic relief between the action and adventure. Second, the author illustrates how women were prejudiced against and treated so differently during medieval times. We take for granted women's liberation, but it's shocking to see how very little rights women have had in the past.

The story moves back and forth between time periods to show how Emily and Electra are coping in medieval England and how Roger and his scientist friend--quite an endearing character, I must say!--come up with a way to travel back in time in order to bring them back. The ending was satisfying and felt just right.

In sum, if you're a fan of time-travel romance, be sure to pick this one up. It brings hours of fun, pure escapism.

Confessions of an Eccentric Bookaholic posted at 8:40 AM