Book Feature: A is For Apprentice by Steve DeWinter 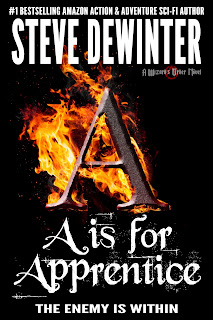 It is said that when the student is ready the teacher will appear.

In Midguard, Spinners are practitioners of innate magic who must learn to control the power that lives inside them before it destroys them.

With the mysterious death of his father, only days before his training is to begin, the knowledge of Van’s lineage as a powerful Spinner is hidden from him. Five years later a near-death experience awakens the dangerous powers within.

Halen, a banished Spinner, is the only one willing to teach Van to manage the magic before it consumes him. He must train Van to hone it into the powerful force needed to stop a vindictive Spinner whose personal mission to conquer Midguard would start a war resulting in the deaths of millions.

But how do they save the world, and Van’s very life, when both apprentice and master are forbidden from ever crossing paths by the same organization created to bring them together?

A IS FOR APPRENTICE is a fantasy novel from the #1 Bestselling Amazon Action & Adventure Sci-Fi Author, Steve DeWinter. This is his next foray into the genre after releasing A Tale of Two Cities with Dragons, a fantasy mashup of the #1 Bestselling Novel of All Time, co-authored with Charles Dickens.

ORDER INFORMATION
A is for Apprentice is available for order at

Steve DeWinter is one of the best adventure authors in the world and, after authoring over 40 books, he still works tirelessly to keep up with the growing demand of readers wanting more across multiple genres.