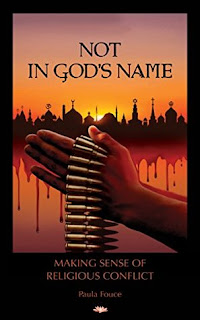 “We're all praying to the same Divine, which is called by many names or no name at all.” In her new book, NOT IN GOD’S NAME: MAKING SENSE OF RELIGIOUS CONFLICT, Paula Fouce searches for solutions to end the escalating violence between religious groups. She has lived and worked in many South Asian countries including India, Tibet, Pakistan, Afghanistan, and Kashmir, where she experienced a variety of vast cultural and religious diversity.  But Fouce came face-to-face with the destructiveness of religious-based conflict while in India when Prime Minister Indira Gandhi was assassinated by her Sikh bodyguards.

As a result of Gandhi’s murder, thousands of Sikhs were massacred. Fouce escaped unharmed, but she was shaken by the explosion of violence from a people who had treated her with care and compassion before the death of their leader. The experience prompted Fouce to undergo a personal quest to understand the reasons behind the intolerance. What was the genesis of violent religion-inspired conflicts – the underlying chaos that has led to major violent conflicts such as the Crusades (1095–1291), the Partition of India in 1947, the 2009 Mumbai attacks, the September 11, 2001 attacks in the United States, the 2015 Paris attacks, and other religion-inspired conflicts?

In NOT IN GOD’S NAME: MAKING SENSE OF RELIGIOUS CONFLICT, Fouce shares her journey for spiritual enlightenment that began after she survived a car crash in which she was thrown from the vehicle. After her recovery, Fouce traveled to India in 1974 for a semester of study focused on Hindu and Buddhist art. During an early trip, Fouce met Mother Teresa. She returned to India after graduating from college to continue her spiritual exploration, export art, and guide luxury tours.

NOT IN GOD’S NAME: MAKING SENSE OF RELIGIOUS CONFLICT discusses the histories of Islam, Hinduism, Buddhism, and Christianity, as well as Jainism, Sikhism, Zoroastrianism, and other religions. Fouce spoke with several leaders in the religious tolerance movement, including the Dalai Lama; Mark Juergensmeyer, professor of Religion at the University of California, Santa Barbara; Dr. Karan Singh, a member of India’s Upper House of Parliament; and Dr. Joseph Prabhu, a trustee of the Council for the Parliament of the World’s Religions. In the book, the author asks probing questions of faith leaders and scholars in order to devise solutions for ending the violence among religious groups.

“Although there are differences, we can develop a deep respect for all faith traditions that contribute untold richness to our civilization. Religious tolerance is our greatest tool for promoting world peace,” Fouce says. She identifies specific causes of religious intolerance and offers solutions for bringing the world’s faiths together.

After escaping the Indian religious riots in 1984, Fouce was “was struck with how religion had been twisted and used to create dissention and violence, the antithesis of its intention. My point of view is focused on how to bridge our differences; and my book goes into detail, even describing the compassion training that is now taught in many top universities.” Over the three-year period that Fouce worked on NOT IN GOD’S NAME: MAKING SENSE OF RELIGIOUS CONFLICT, she used the transcripts from interviews for the film documentary of the same title (which was aired on PBS stations nationwide) and researched news stories of current religious conflicts. “Education is sorely needed to ensure a peaceful world where it is understood that diversity is not a threat or a detriment to one’s own good. Diversity is to be celebrated,” Fouce says. “Our unquestionable right as human beings is to freely worship the God of our understanding and to follow that spiritual path whose practices support our doing so.”

Fouce’s purpose for writing NOT IN GOD’S NAME: MAKING SENSE OF RELIGIOUS CONFLICT is to help the reader to understand that there are solutions to religious intolerance. “How do we change the minds of violent fundamentalists? This is the real task ahead, together with preventing people from being attracted to such ideology in the first place. Can we find a middle ground, a live-and-let live coexistence? Herein lies the only answer to the challenge of creating a peaceful future with acceptance. The continued existence of the human race depends on it.”


In the countryside outside Delhi, our car sped past endless miles of yellow mustard fields gently rippling in the warm breeze.  It was 2002. My friend Arif was taking me to visit madrassas, Muslim religious schools, in the small agricultural villages. A Kashmiri Muslim, Arif was keen to help me comprehend the causes of religious bigotry. He too had witnessed strife between followers of different religions. I had met him years before in India, when we were both immersed in the peaceful lifestyle of the Himalayas.  It was an idyllic time.
Turning off the main road onto a dirt path, we dodged ancient bullock carts lumbering past. The air was clean out here and I inhaled deeply. The village was peaceful and picturesque. Our car pulled up to a rambling clutch of cement buildings. One was quite elaborate, bearing a striking resemblance to a mini Taj Mahal.
As we climbed out, Arif said, “You don’t know much about Islam, so here’s your chance, to ask this guy whatever you want.”
“True, I’ve been living with Hindu yogis, but this will be totally different.”
Yogis eschewed society’s distractions to seek the answers to the deepest questions of life. They allowed me to accompany them on the ancient footpaths to sacred shrines high up in the Himalayan Mountains. I had spent time photographing them for a book on yogis, Shiva that I wrote with my friend, Denise Tomecko. “The way the Hindus embraced me, their kindness was overwhelming! They invited me into their temples and homes, and offered me their only piece of bread.”
“That’s right, in India our favorite saying is, “Guest is God,” he laughed.
“That’s when I know the snacks and milk tea are coming. Even though they have so little.”
It felt a little strange accepting the boundless offerings they showered on me. I had grown up privileged in Los Angeles with loving parents, and had been fortunate to attend the best private schools. “The yogis and lay people viewed me only as spirit, as an expression of God.”
“That’s India,” Arif laughed.
“You’re right, this is a good chance to talk to a Muslim holy man!” Walking across the powdery dirt clearing surrounded by yellow mustard flowers towards traditional buildings covered in intricate Islamic patterns, we were greeted by young Muslim boys attired in colorfully embroidered baggy trousers and long loose shirts, with skull caps, their huge smiles revealing perfect bright white teeth.  A man with a long beard sitting on a hemp cot, greeted us with the traditional “Salaam halekum,” and motioned me to sit. Hindu, Muslim and Sikh villagers were gathered at his feet in rapt attention as he sat relaxing outside.
Arif explained, “As the head of the madrassa, school they seek him out for prayers and healings, they scribble their problems and those of loved ones onto those small slips of paper”.  The faithful folded the scraps and dropped them on the cot where the holy man prayed over them.
He requested one of his young students to bring tea, as well as his massive, aged and dog-eared copy of the Quran. He stood and made a point of showing me passages in the holy book about Jesus and Mary.
He read in Urdu and Arif translated, "If somebody had leprosy, he would be healed. And he would go to the graveyard and tell the dead people, "get up," and they would rise. And he would tell the people what was in their house, and the house would be many miles, five hundred miles away. He knew all, this was a symbol of Jesus Christ."
I asked him, "What is Jesus called in the Quran?"
"Isa Massi. There are two stories about Christ in the Quran. This is another one." He turned the pages. Arif continued translating, "It's about Mary now. She was taking a bath in the jungle, cordoned off with cloth. Gabriel came. She was under a date tree, and she would just shake the tree and eat the dates during her pregnancy. And there was a spring right there, where she used to get the water, right there in that place. It's written in the Quran. And she came with the child, and people sort of looked down upon her wondering, how, where did she get this baby? And the child spoke at that time. He was ten days old. ‘I am God's follower and I am sent by God, and I have come with the Bible, the book of God. And I will always listen to my Mother.’”
"He went to Israel, that is where he was crucified. From there he vanished. And he's alive up there," he pointed skyward. "And he'll come back again to us," the Muslim man smiled.
I was touched by how he sought to find common ground with me, pointing a bony finger at the Islamic script as if I could actually read every word; he enthusiastically recited the passages aloud in his gravelly voice.
The wizened holy man then led us into the madrassa where a row of boys sat on the floor huddled over a long, low wooden table supporting massively thick Qurans. Their haunting melodic voices recited from the holy book for hours as they tried to memorize its’ words. “By the time they are eighteen,” Arif explained, “they will know the entire Quran by heart.

Confessions of an Eccentric Bookaholic posted at 6:46 AM